Say NO to lifetime politicians, Vote NO on Issue 2 and Issue 3

The Term Limit Amendment proposal on the 2020 ballot is a fraud referred by the politicians in the Arkansas Legislature. Issue 2 will eliminate lifetime term limits for Arkansas legislators, allowing them to "serve" until they die with ocassional short breaks. The politicians in the Legislature co-opted our amendment name, apparently to trick voters into thinking it was the same citizens initiative to roll back legislative term limits.

Under the proposed amendment, legislators can serve up to 12 consecutive years followed by a four year break, and then run again. However all current legislators, and those elected in 2020, will continue to operate under existing rules, which is up to 22 years, then be covered by the new rules. That would be 22 on, 4 off, 12 on for a total of 34 years in office out of 38. Nice work if you can get it.

The actual restiction is 12 consectutive years, but if a legislator opts to take a break after 10 years, he has broken the consecutive years string and the counter starts over. So, he could serve 10 on, 2 off, 10 on, 2 off, 12 on for a total of 32 of 36 years in office. And he could keep serving like this until he dies. Term limits by politicians, for politicians. What's not to like?

They don't tell you what it does. When you get in the voting booth, the ballot title won't tell you any of this. In fact, it doesn't tell you anything except that its amending term limits for legislators. This is, of course, by design. If they were to tell you what it does, you wouldn't vote for it. They know polls consistently show that over 70% of Arkansans support stricker term limits. 100% of lobbyists and the special interests they represent love this proposal. Arkansas legislators have learned from experience that dishonesty in ballot titles works for them.

Although most legislators voted to refer this fraud to the voters, you can thank state Senator Alan Clark for dreaming up and sponsoring this attempt to once again trick the voters into gutting term limits for legislators. Throw in an honorable mention for his co-sponsors Ron Caldwell, Breanne Davis, Lance Eads, Trent Garner, Ricky Hill, Mark Johnson, Terry Rice, Bill Sample, and Gary Stubblefield, many of whom also voted to get it out of committee. The folks whose names are bold also voted to refer the 2014 amendment that gutted citizen term limits. This is the politicians idea of good term limits.

Remember, the legislators had no trouble voting for a dishonest ballot title that doesn't tell you what the amendment will do. Only three state Senators voted against it, Dismang, Hendren and Maloch. It's a repeat of 2014 when they gutted the people's term limits in the so-called ethics bill. Consider voting against incumbents.

Voters like term limits because they don't want career politicians.

Politicians hate term limits because, well, they want to be career politicians. 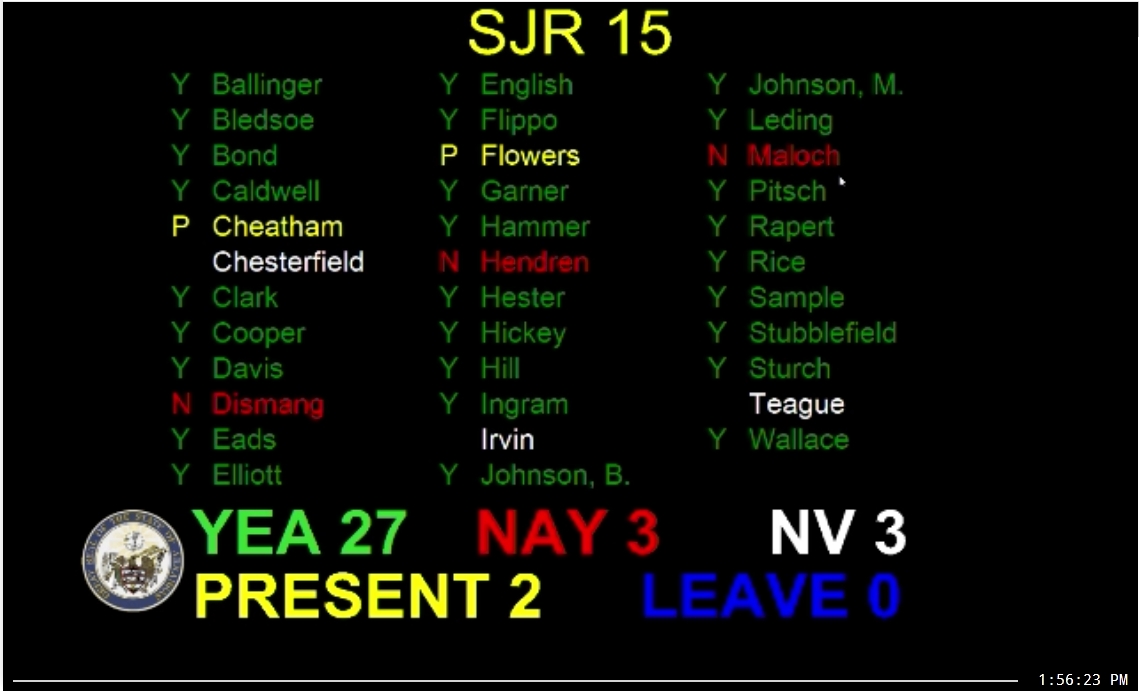